“No one can say a true word alone.”
Pedagogy of the Oppressed, Paulo Freire

Since the early 1980s, Chicago Public Art Group (CPAG) artists have been creating a new form of collaborative painting. Often called “banners” by the artists because many of the pieces consciously evoke the traditions of liturgical or demonstration banners, the works use the collective methodologies evolved by the community mural movement to create portable paintings.

CPAG artists are part of a cultural movement originating in the 1960s and 1970s in grassroots political work, which reinvented painting as a public and publicly owned art form. Though drawing aesthetically on precedents set by the Mexican mural movement and American populist murals, the new street muralists radically changed the meaning of the mural form by eschewing government patronage for support from diverse, locally controlled groups. Clearly part of the meaning of these works was their inherent resistance to commodification and their ability to be seen and understood without mediating institutions such as galleries and museums.

Having recreated a tradition in which painting was tied to particular sites and in which its use as a means of articulating specific political and cultural agendas was foregrounded, some community muralists in the 1980s began to introduce “movable art” into their repertoire of community-based art practices.

Drawing on the constantly evolving collaborative strategies of the community mural movement, these paintings were often conceptualized and created through a collective process involving several artists and members of the works ’ intended audiences. This collective creation is an innovative departure from the conventions of Western painting, which, save for exceptions such as long-term collaborations between Komar and Melamid or Gilbert and George, locates authenticity and meaning in the sensibility of a single individual. In contrast, these works by CPAG artists are meant to be understood as collaborative ventures, in which meaning is generated by the tension created by different ideas, different aesthetic sensibilities, and different hands clearly visible in the final works.

The reasons for the evolution of a portable variation of the community mural form are many and are intrinsically tied to aesthetic and political strategies, and hence, the meanings of the works. In pieces such as John Pitman Weber’s Share, Rise, and Balance, the paintings can be rearranged and new ones substituted, allowing for a changing installation that reflects the recollection and performance of seasonal liturgy. Other banner projects support social action and communication by circulating the collaboratively designed and executed pieces to many places, creating sites of discourse in which the issues and images can be discussed and debated.

A particularly interesting use of the form is to encourage edgier, more transgressive content and imagery in community generated public artworks. Community muralists have noted that exploring the cultural creation of racism and repressive political agendas can seem more problematic to audiences when works are permanently affixed to walls. Somehow the banner format, even when the intent is a permanent installation, seems more suited to tentative explorations and interrogations of past practices. These banner works, then, can perhaps best be seen as hearkening back to the roots of the community mural movement, making works that seem to be not personal pronouncements, official edicts, or resolved party positions, but rather the opening and encouragement of community dialogue and action.

This show is dedicated to the memory of Paulo Freire, a Brazilian educator who inspired community artists throughout the world with his ideas of artists and teachers working in respectful and loving dialogue with the communities they serve.

Dialogical Painting is part of the Catalyst series established to promote the visual arts at local levels and to foster cooperation and partnerships between community agencies, artists, and arts educators. 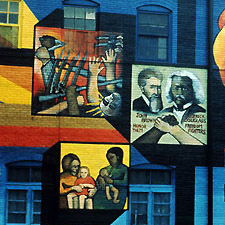 In 1971, a group of artists concerned with the relationship between art and society founded the Chicago Mural Group, later renamed the Chicago Public Art Group (CPAG). The founding mission was to establish creative partnerships between artists and communities in an effort to transform and enhance the lives of residents in urban Chicago neighborhoods. Over three decades, what began as a mural-based cooperative broadened to include mosaics, sculpture, landscape design, and sponsorship of workshops and symposia. CPAG has produced hundreds of public art projects with neighborhood groups, community development organizations, churches, schools, and social service agencies. Cosponsors have also included the Chicago Transit Authority, the Chicago Department of Transportation, the Metropolitan Pier and Exposition Authority, and the Chicago Park District. CPAG projects combine legibility, accessibility, craftsmanship, and artistry to create monuments to local history, identity, values, and concerns. CPAG works responsively with planners, designers, organizers, youth, and adult residents to produce projects that are long lasting and beautiful. CPAG grounds planning in the social and spiritual needs of the community and in the physical world of appropriate materials, ease of maintenance, and functional design.

Dialogical Painting is made possible by the School of Art and Design, the College of Architecture and the Arts, and supported in part by the Illinois Arts Council, a state agency.